The Japanese word Aikido is written with three characters (合気道), which translate as “the way of unity with the fundamental force of the universe”.  Aikido is a true budo or Martial Way that evolved in the historic tradition of Japanese warrior arts. Studied in earnest, budo is more than a science of tactics and self-defense – it is a discipline for perfecting the spirit. 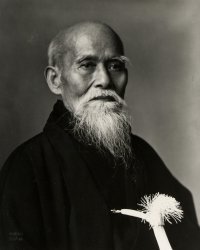 Aikido was developed by Morihei Ueshiba, known as O-Sensei (Great Teacher) to more than one million students of  Aikido throughout the world. Even as a young man, he was an extraordinary martial artist, a master of the sword, the staff, the spear, and the art of ju-jitsu. But O-Sensei also had a strong spiritual drive, and brooded over the futility of a path based on victory over others. “The secret of Aikido,” he wrote, “is to harmonize with the movement of the universe and bring ourselves into accord with the universe itself.” O-Sensei maintained that budo is a work of love, a path to overcome discord in ourselves and bring peace to the world, “to make the heart of the universe one’s own heart.”  There have always been visionaries of remarkable insight, but O-Sensei taught that true awareness is not grasped by intellect alone. “This is not mere theory,” he said. “You must practice it.” 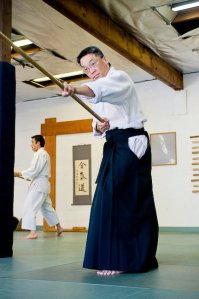 In developing aikido, O’Sensei was heavily influenced by daito ryu aikijujitsu and several styles of Japanese fencing and spear fighting.  O’Sensei came to see aikido as rooted less in achieving physical domination over others but rather attempting to cultivate peace and harmony in all things.  This influenced the direction of technical developments of aikido to defend oneself against an attacker without causing serious or permanent injury. Aikido emphasizes evasion and circular movement to redirect an attacker’s aggressive force into throws, locks, and immobilizations as a primary strategy rather than punches and kicks.  It emphasizes agility, timing, body control and balance over strength and force.  Aikido practice also involves weapons training. The primary weapons in aikido are the jo (wooden staff), bokken (wooden sword), and the tanto (wooden knife).  Besides being used to teach defenses against armed attacks, it is also instrumental in illustrating the movement of Aikido.

The final aim of budo is personal transformation, the creation of an integrated human being. Yet philosophical discussion is rare in the dojo, or training hall. The focus is highly practical: constant repetition to master the fundamentals of movement, timing and breathing.  Students train themselves to capture the opponent’s action and redirect it with techniques of martial efficiency and power. At the same time, they become aware of the tendency to overreact to opposition, and learn to remain centered under all conditions. 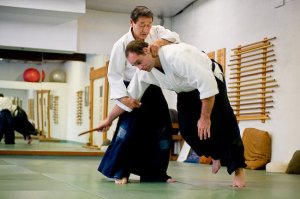 The essence of all Aikido techniques is spherical motion around a stable, energized center. Even when the direction appears to be straightforward or backward, close observation reveals the Aikidoist’s movements are in fact circular. Properly executed, some techniques are spectacular, sending an opponent flying through the air. Others are like sleight-of-hand: small, deft movements that immobilize the aggressor. Both results are achieved through precise use of leverage, inertia, gravity, and the action of centrifugal and centripetal forces. Ultimately, it is the energy of the attack itself, which brings down the attacker.  Increased stamina, flexibility, and muscle development occur naturally as a result of training, but the techniques themselves do not depend on strength for effectiveness; men and women of all ages can practice Aikido.